We came into Zimbabwe not really knowing what to expect, except that we would need US dollars and that the police are corrupt and frequently seek bribes. Over the past section of the trip, we have learned so much about the peaceful locals and rich culture — yet hurting economy and bloody history — of this country.

After our new friend, Israel, left us at the Tintagel B&B, owners Carol and James (and grandson Calvin) took us under their wings. Not only did they nurse Simon back to health, but they spoiled us with delicious home-cooked meals/jams/chutneys/butter/you-name-it and gave us a tour of the property. Carol and James explained they lost their farm when the government [sometimes violently] kicked white farmers off their land in order to re-distribute land to native African farmers. Due to the country’s colonial past, much of the best farmland was owned by white commercial farmers, which the president boiled down to a white-black issue. However, Carol and James were born here, and their parents, and theirs… you get the picture. They had worked hard in the butcher shop industry to eventually have the ability to buy the farm, which was seized from them. Fortunately they were able to sell their cattle, and buy a smaller fruit farm, but that was eventually taken as well. They have now opened the Tintagel B&B and Tea Garden, but because of negative press in the media and US/UK sanctions against President Mugabe, tourism in the country remains very low.

This is what our travel guide says about it:

…behind the grim data lies one of Southern Africa’s most beautiful – and today, un-touristed – countries. And despite being forced to sacrifice so many things, Zimbabweans have not lost their humour or resolve. With so few visiting the country, those who do can expect royal treatment. They need you.

Instead of the government placing farmland into the hands of local black farmers, as promised, much of the land ended up in the hands of ministers and close friends. This meant that much of the formally productive soil stopped being tilled, exports plummeted, the local currency lost all value, and unemployment is estimated at 90%. The former “Bread Basket of Africa” is now using US dollar, but even that is disappearing as it’s needed for importation of the foods and goods not being produced within the country. This is why travelers need to bring in their own USD and not rely on local ATMs, which will only give $20/day IF you stand in line all day and the machine hasn’t run out when you get to it. Even those who are employed, are affected by the economic conditions, which has forced the police to fundraise their own wages through bribes at check-points. Fortunately for us, they leave cyclists alone!

The climate in the Eastern Highlands is perfect for gardening

After recovering from his fever, Simon cleaned the bikes (one of his favorite chores) 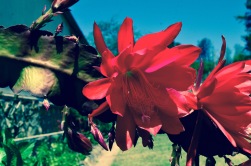 A small reminder of Colorado…in Africa.

Home away from home at the Tintagel B&B 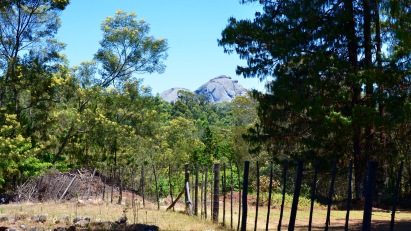 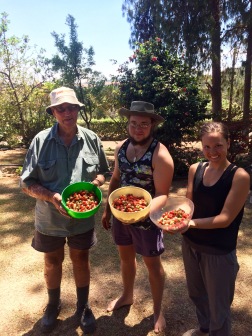 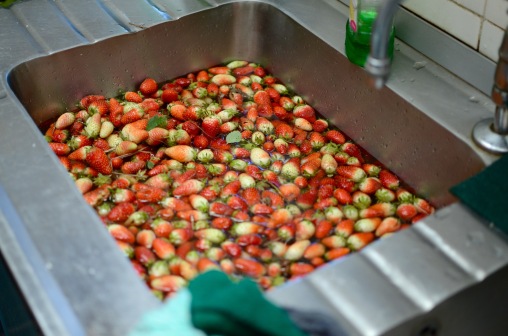 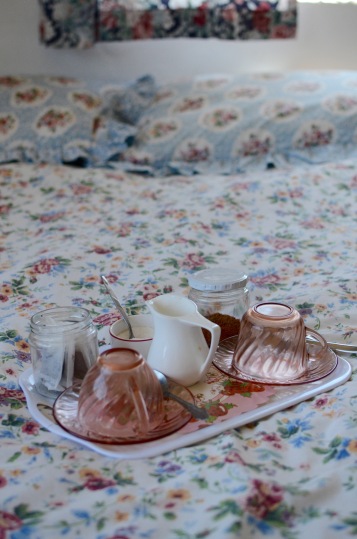 A welcome sight after days on the road – we felt like we were back in N. Ireland 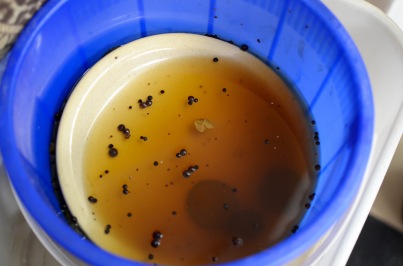 Despite the harsh realities facing the country right now, the people here continue to strike us as the most peaceful and welcoming. After leaving the B&B, which was hard to do when we felt so at home, we met up with a teacher we met in Victoria Falls at the start of our trip. Humfrey had invited us to visit his school and talk to his pupils, which was the reason we found ourselves in the blissfully cool climate of the Eastern Highlands region to begin with! Our first day at the school, we found ourselves as guests for a [6-hour] prize-giving ceremony recognizing the achievements of the students. We were very impressed by the size of the school, standard of education and smart attire! We then had the opportunity to meet with the “Ray of Hope” club to talk about our home countries [USA and Northern Ireland] and our journey here. They asked us to share fundraising ideas with them, as they try and sponsor primary (elementary) school children who would not be able to afford secondary (middle/high) school fees. We felt honored to be hosted by them and enjoyed getting to know Humfrey and his family. 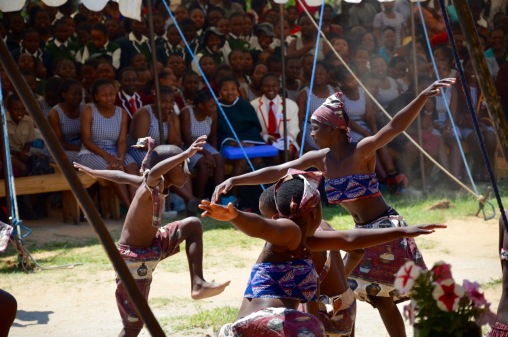 Marching in the teachers and guest speaker (a former student, now lawyer)

Sharing our adventures with the ‘Ray of Hope’ club

Thank you for hosting us Bonda Mission!

We would never tire of this meal. Good thing it is a staple across the country 🙂

Humfrey took us to see the Cecil John Rhodes Hotel

After so many days of rest and re-fueling, we felt energized to continue cycling. At the recommendation of our hosts, we re-routed ourselves to head to Zimbabwe’s namesake – The Great Zimbabwe Ruins. This section meant dropping back down into lower altitude and a sweltering 45 degrees C (107 degrees F). We felt like we had been locked into a sauna, and were forced to take a 3-hour lunch break in the dining area of the local hot springs, which we found painfully ironic. We attempted to beat the heat the next day, waking at 5am to get on the bikes by 6am. Funnily enough, cloud cover and a precious sprinkling of rain provided the coolest day we’ve had on the bikes. The next 8-day stretch went by easily enough and was highlighted by visiting the Great Zimbabwe Ruins (a testament to the sophistication of Zimbabwe’s ancestors) and meeting a few local cyclists in the mining area of Shabini. Our new cyclist friend, Tirivash, even spent a day training with us by trading my heavily loaded bike for his light-weight speedster. I had a relaxing day as we ate up 120 km, and then the hard-core Tirivash jumped on his bike and cycled the 120km back home! We finally made it to the city of Bulawayo and into the welcoming home of Mr. and Mrs. Motsi, whom Simon’s uncle, Reverend Joe, married in 1990. Again, we find ourselves being spoiled with home cooked meals – local dishes like Amasi (local yogurt), peanut butter rice, maize porridge – and even freshly-baked scones! Sensing a theme? Despite the initial trepidation from travel guides and government warnings, the welcoming people, mountainous landscape, and diverse foods made Zimbabwe a cyclist’s dream for us. Next up: Botswana!

Our adopted Zimbabwean mom found us on the road!! 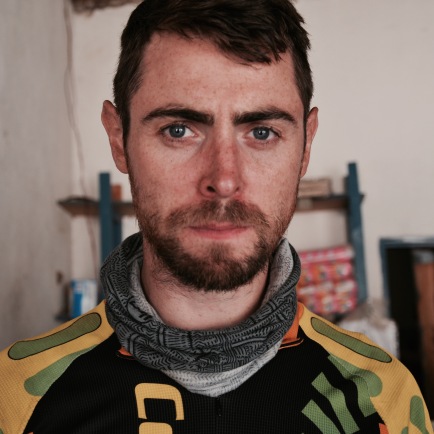 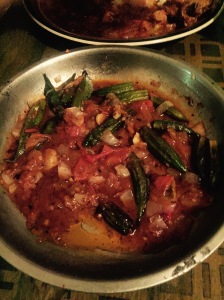 We’ve entered the okra region and ooh is it delicious

This is the fruit from the Baobab tree. The inside is bittersweet and chalky in texture.

Our route in Zimbabwe was lined with picnic tables, much to our delight! 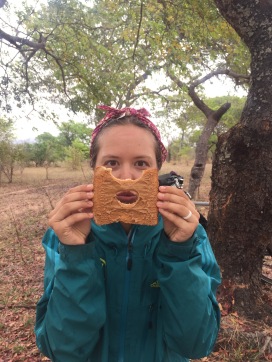 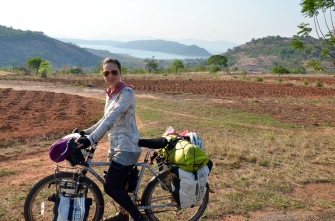 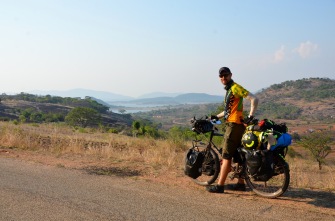 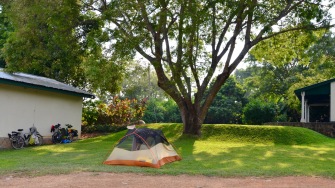 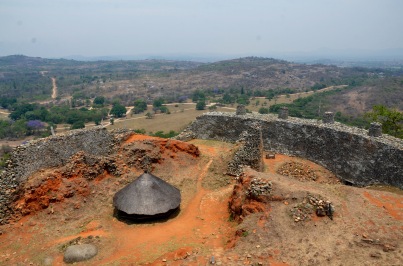 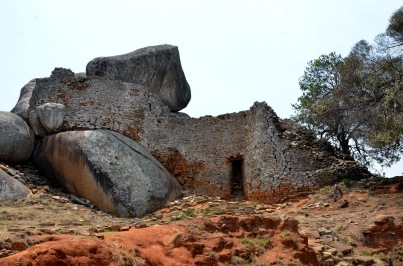 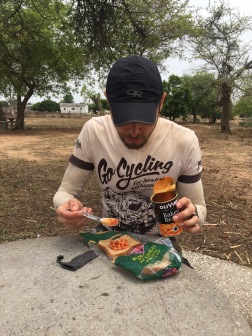 Sam Jack (the only other traveler we’ve met in Zim) 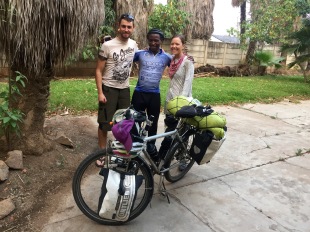 Tirivash, our new cyclist friend we met on the road

Hosted by the family of cycling enthusiasts

Tirivash cycled Olivia’s bike for 120km while she easily cruised on his racing bike – talk about a support crew!

GLAMPING at a filling station 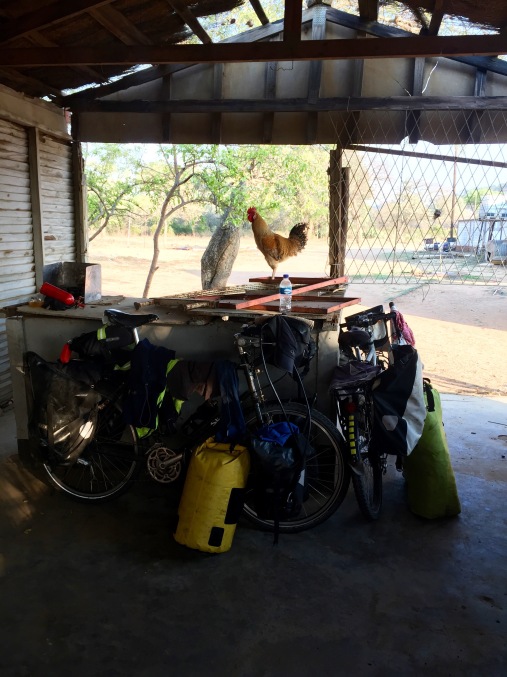