We spent four nights in Coyhaique, mainly due to my birthday celebrations (the big 30!). Since we spend most days on the bike exercising, I decided the best way to spend my birthday was in bed watching TV and movies. Olivia also treated me to everything and anything I wanted in the supermarket. Chocolate, cereal, bacon, eggs, good coffee (a rarity in Chile as they mostly sell instant), smoked salmon, you name it we had it! Although cycling through Patagonia on one of the worlds most beautiful cycle routes with Olivia is certainly a nice way to say goodbye to my twenties!

The first ten miles cycling again was tough. I distinctly remember looking over to Olivia as we were cycling up a small, but steep, hill and saying “Is it just me or has this got harder?” “I feel it too, it’s a good thing we didn’t spend anymore time in Coyhaique or we would get fat!”, she replied. We were glad that at least we had 100km of asphalt to get us back in shape before we hit the gravel again.

We had our biggest climb to date on the Carretera Austral, one thousand meters, on this section. It was a long gentle gradient to the top and it gave us plenty of time to appreciate the beautiful scenery on offer. Autumn is in full swing here and the colours of the forrest were stunning with large mountains looming in the background. (Olivia: Gentle gradient is right! It didn’t even feel like we were climbing half the time. We were amazed at the change of scenery in such a short distance. This section is incredibly different from the rainforest scenery further North on the Carretera.)

We enjoyed the steep decent down to the small town of Cerro Castillo and picked up some supplies for the next few days. This town also marks the end of the paved road and it wasn’t a pleasant change over. We had to climb five hundred meters out of a valley and the road surface was horrible. Large stones and very loose gravel meant that we had to push our bikes at the steepest points and my front pannier broke due to all the bouncing around, but luckily it was a simple problem to fix even for one so inept at DIY as myself.

We did eventually find a wooded area, overlooking a beautiful green lake aptly named ‘Largo Verde’, to pitch our tent. There is nothing quite like enjoying a warm fire in a picturesque wild camp spot with no one else around. The next night we found an equally awesome camp spot by a river. We both took a needed but very brief bath in the glacier water.

So far on our trip we have been pretty lucky with our bikes and equipment standing up to the tough weather and road conditions. Eventually though something is going to break and unfortunately for us it was something we couldn’t fix or patch ourselves – Olivia’s rear derailleur cable. So what does that mean? Well it means that Olivia’s bike went from 27 gears to 3 – the 3 hardest gears no less.

This didn’t present too much of a problem initially because we were cycling on a small downhill for around 15 miles, but as soon as we hit the uphill she had to get off and start to push – since we were in this together I did likewise. After about an hour we decided to camp and figure out what to do. Since most of the land we were cycling through was farmland we thought it best to ask a local farmer if we could camp on some of his land. We had not even ushered the words out in our broken spanish before he was frog marching us off his land shouting. We understood the general message: “get out and stay off my land!”. Not exactly what you want after a long hard day! Luckily we found a spot just off the road and out of sight, which admittedly might have been on his land but we couldn’t be sure. (Olivia: On his land,  over his fence…oops!)

Having considered our options: 1) hitchhike back to Coyhaique where we could get a replacement cable 2) hitchhike forward to Chile Chico or Cochrane 3) spit up, with one person staying with the bikes and the other going to get the part from one of the above said places. We opted for option number two. After packing up our things we sat by the side of the road expecting a long wait for someone able to pick us up – two bikes and all our gear takes up quite a bit of space!

To our surprise we got picked up by the second pickup truck that passed our way. He wasn’t going to where we could get a part but he was going to Rio Tranquillo, a main town on this stretch were we could at least stock up on some food. Our second attempt at hitchhiking didn’t go quite as well and after a couple of hours we decided to push ahead, quite literally, in the hope that some of the passing drivers would take pity on us. It didn’t work that day, which was all the better for us as we had one of the most beautiful camp spots of our trip – right on the lake (Lago General Carrera).

We packed up the next day and said, “this is it, this is the day we are going to get to somewhere we can get this problem fixed”, and luckily it proved so. After a long stretch of pushing uphill/riding downhill, we got picked up by a very friendly local in a lorry. Even better, after 10 minutes riding with him, some cyclists came into view. Olivia jumped out and asked them if they had a spare cable, which they did! The two very friendly English guys heading north not only gave us the cable, but didn’t want any money for it – Todos los cyclistas son amigos (all cyclists are friends). We got dropped off at the turn off to Chile Chico (a border town with Argentina) and I set to work to replace the broken part.

Now those of my friends that have had the privilege of seeing my DIY skills will tell you that I would be more likely to do more damage to the bike than to fix it. However, I was able to fix it – more down to luck than skill – and we were back on our bikes and in good spirits again. (Olivia: Not only did he fix it, but in only five minutes! I didn’t even have time to grab out my book!)

We then set off toward Argentina, and said our goodbyes to the Carretera. (Olivia: It felt amazing to cycle hills again instead of hike-pushing!) All the difficulties of the past few days were completely gone when we saw the views on the road to Chile Chico. I couldn’t do the scenery justice and I don’t think our camera does either, but believe me when I say that after more than four months of cycling it was some of the most stunning scenery of our trip. (Olivia: Simon also conveniently forgot to describe the wind that we encountered on this stretch. The road hugged a cliff over-looking the northeast side of the lake. A nice tail wind was pushing at our backs, but at one point we rounded a corner and the wind was so strong it literally pushed him off his bike! It was hilarious, though I was really glad he wasn’t closer to the edge of the road. Yikes.)

That night we camped and woke up in the morning to a hole in the top corner of our  tent where we keep the trash. We thoroughly searched the tent for our rat friend, but thankfully didn’t find him. We only found mouse droppings next to our dishes outside. Lesson learned!

Despite setting off late that day (1pm, because it was raining outside) we made it to Chile Chico but decided to wild camp in a nice spot overlooking the town to save some money. We wanted to make the most of our rest day before crossing into Argentina and all the luxuries that go with it – namely the kitchen, TV and bed. We had a beautiful sunrise to greet us before we cycled the huge distance of 0.5 miles into town.

Next up is Argentina. We hear good things about their meat and wine selection! 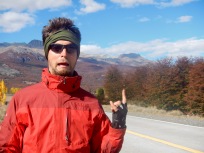 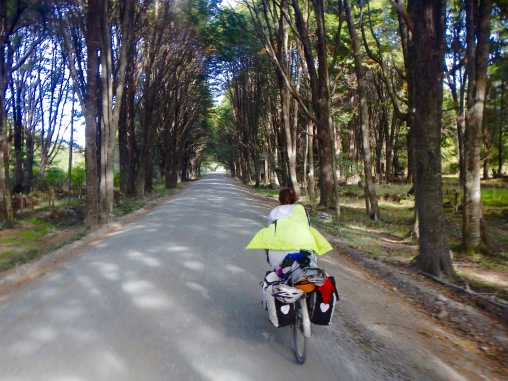 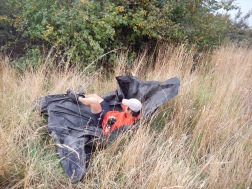 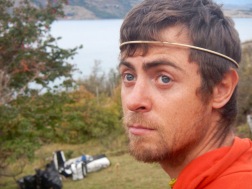 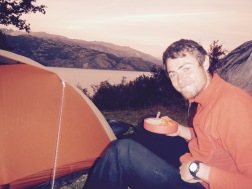 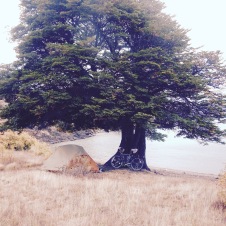 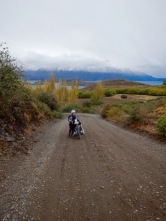 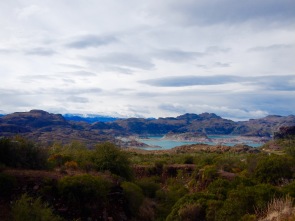 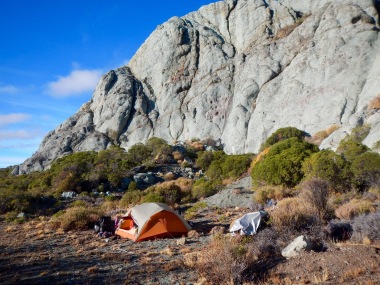