Let me start by saying… Throughout the trip Simon and I have said there isn’t any time pressures. That’s not the case anymore! Cycling in the South of Chile in the winter (May-July) is like cycling in Canada from Dec-Feb – unadvisable. So after sleeping on the floor in the firestation in Calama for a night, we jumped on a bus to La Serena. We were asleep for most of the ride, but felt no regret as we looked out the window at hundreds of miles of desert. Services and possible camping spots were sparse with plentiful wind – not a great combination!

La Serena turned out to be a massive city, which came as some surprise to us. Chile is a whole lot more built up than Peru and Bolivia. We didn’t stay long, making our way to a smaller beach further South. What we thought would be a relaxing cycle that morning turned into a nightmare when the hard shoulder on the interstate kept ending, yikes! On Totoralillo we rented cabana for a couple nights and fully recuperated from the exhausting journey from Uyuni.

The next few days to Los Vilos were spent on the shoulder of the Pan American Highway – the only road going South along the coast here (though it’s just far enough away from the beach to eliminate any view of the ocean). Unlike Peru, it felt more like a major interstate. The sounds of giant semis and trucks racing past quickly starts to wear on the nerves! Also unlike Peru, a barbed wire fence runs along either side of the interstate, blocking all the nice camping spots. We lucked out a couple times, finding seemingly the only sections of broken fence when we were ready to stop for the evening. Another night we camped next to a church, which has proven to be a reliable option. We also payed for a campsite once (the first time on the trip) – $15 for one night – same price as a hotel in Peru! One thing is for sure, Chile is expensive. It’s no wonder we headed straight to the fire station when we got to Los Vilos to ask if we could camp there (Simons comment: On advice from another cyclist that we met heading North who said all the fire station staff in Chile were especially friendly).

We were standing outside the fire station when a woman stopped and asked us what we were doing. We explained we were going to camp and she exclaimed “Come with me! My house is a free hostel!” It took a moment for what she was saying to set in and she even called her daughter (conveniently an English teacher) to translate for her. We happily accepted and were blown away by her hospitality. Betty set us up in her guest room and cooked us a delicious meal. She also convinced us to stay the next day so that she could cook us seafood, not that it took much to convince us! With the help of a missionary from her church translating during lunch (a girl my age from Utah), she told us someone must be praying for us because she felt compelled to offer us hospitality when she saw us. It was much appreciated!

The extra food and rest gave me a noticeable boost the next day – it was one of those rare days when I cycle faster than Simon, up hills no less! (Simons comment: Just to clarify, I was sick that day) After Los Vilos it was another days cycle on the interstate before reaching Ruta del Mar, a beautiful coastal road to Valparaiso (our next destination) with less traffic and amazing views. The newly built coastal homes along this route are proof of Chile’s thriving economy. There are ultra modern, glass-walled homes with their own private beach and swimming pools to boot.

We were about to reach Valparaiso – the hilly city of antique operational elevators – when a funny thing happened. A local cyclist stopped us and asked us not to continue to Valparaiso but to instead go to his home. He is a pastor and felt God telling him to invite us for lunch. He had a very welcoming family and we ended up spending the night there. To have such a similar experience in such a short time has us thinking…either people in Chile are unusually friendly, someone is looking out for us, or both.

Side-note: When sleeping on the pastor’s floor we were awoken in the middle of the night by the house shaking. I kind of thought it was a dream, but the next morning we were told it was a level 5.4 earthquake. My first (hopefully last) earthquake! (Simons comment: It was more like a nightmare for me because I was dreaming about zombies!)

When we finally made it to Valparaiso we were surprised again by its size — sensing a theme here? It’s a very hip city with a very large art community. The buildings surrounding our hostel are covered in graffiti art and the sounds of a drum troupe could be heard from the nearby park. Today we’ll be exploring the city. Then, in the evening, we’re joining pastor Eduardo for another meal and deciding our route South! 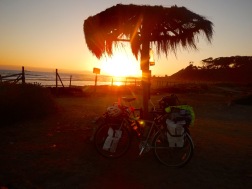 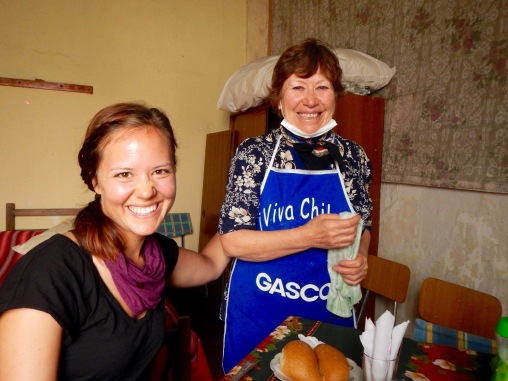 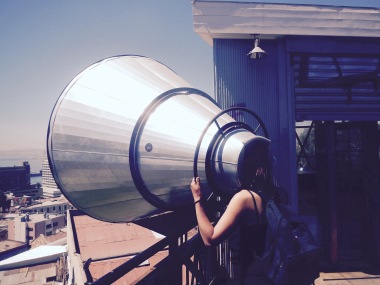 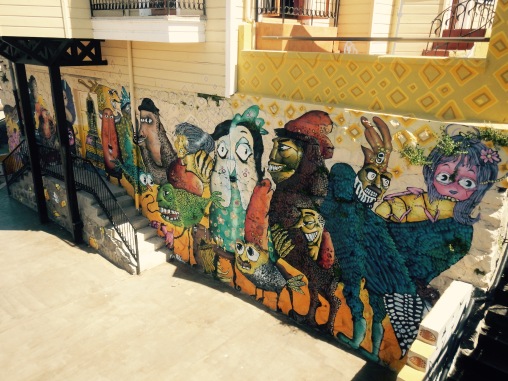 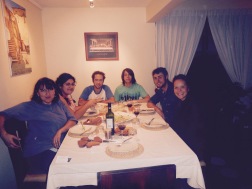