Our newly-made cyclist friend, Hector, made our short stay in Abancay unforgettable. Not only did he escort us into the city and showed us to a nice hotel, but he invited us to eat lunch with his family at his restaurant. He then proceeded to buy us beer to watch the futbol match on TV, it was the Peruvian cup final, and treated us to dinner before inviting Simon to play futbol with a community team that night (9:30pm-11:30pm — waaay past our bedtime). The next day, he bought us lunch again and invited us out for drinks/dancing at his night club. Needless to say, we couldn’t thank him enough for his generosity. We said our goodbyes half-way up the next pass toward Cusco (that’s right — he even cycled out with us). Hector also told us, or so we thought, we could stay with his uncle once we got to the next town, Curahuasi, and gave us his name/address.

For the 19 miles of climbing (up to 3800 meters) after leaving Abancay, I struggled with stomach cramps (Simons comment: but she didn’t complain at all and kept moving regardless). We were almost to the top of the pass (right before the start of a 60km downhill into Curahuasi) when a semi pulled in front of us. Two men got out and pointed to the sky saying, “lluvia!” We determined they were warning us about the oncoming downpour and offering to give us a ride all the way to Cusco. Since I wasn’t feeling well anyway, we accepted, but only for the downhill to our original destination for the evening – so we really only skipped a few miles (200m) at the top. We were grateful to the drivers when it not only started to rain, but hailing as well! When we arrived in Curahuasi, we bought the drivers lunch and then set out to find Hector’s uncle, Francisco Compana.

Francisco seemed to be well-known in town. Everyone we asked kept pointing us in the same direction until we ended up at the post office. Unfortunately, when we asked inside, the post lady looked from her reading glasses with one very raised eyebrow. She told us Francisco was not there. but when we asked outside again they pointed us back in. We tried again, but she shook her head at us, repeated herself and proceeded to ignore us.  Thinking we maybe misunderstood her response, we almost tried again, but neither of us had the courage to face her glare. At a loss, we had a local call Hector’s telephone and talk to him — Sidenote: Up to this point in our trip, very few people have spoken English. People talk at us in Spanish, I pick up a few words, guess at the meaning, then reply in my limited Spanish. Simon uses a lot of hand gestures. It comes to a point where we both just nod and pretend to understand. This was one of those occasions — the local told us something that Hector had said on the phone, and then left.

Simon and I sat outside of the post office, deciding if it was best to try and find a campsite before it got dark. We were literally getting on our bikes to ride away when not-so-friendly post lady had a change of heart. She came out and ushered us around the corner into a courtyard lined with padlocked doors, handing us the keys. We’re still not sure where Francisco was, or anyone for that matter, but most of the rooms looked like they had been lived in at some point. We settled in to one she initially pointed to. Running water, shelter, mattress, scorpion caught in the spider web in the corner to entertain Simon…what more could we ask for? I went to bed early that night and only ate a couple packets of crackers for dinner to avoid upsetting my stomach. The next day I still wasn’t feeling tip-top, but we were both eager to get to Cusco, so I insisted we put in a shift on the road.

We had a good length of downhill, around 25km, that day (Curahuasi is only half-way down the pass) and we only stopped to buy two mangos (30 cents for two – mental!) for the upcoming incline. Dropping back down to 1800 meters brought more searing hot temperatures, but we learned a lesson earlier on the trip: If passing a stream in the heat, always drench yourself to keep cool. I’d like to blame my stomach cramps, or the heat, but I could only climb at a whopping 3.5mph. It’s no wonder Simon insisted we stop for an indoor lunch break at a restaurant. I had chicken soup and he ordered Bistek Milenasa (spelling?) – Beef, rice, french fries, fried egg, and salad – yum. The break must have helped because we increased our speed by a couple mph when we hit the road again.

We climbed past Limatambo before starting to look for campsites. It was a bit tricky that night with all the populated farmland, but we spotted an abandoned house for sale that looked promising. As we stood debating the site, a local farmer walked his two cows past. We think we asked him if we could camp there for the night, and we think he replied – please do, the owner is in Lima! It proved to be the perfect campsite as it rained all night, but it turned out the house wasn’t completely abandoned. Bats circled overhead catching the variety of bugs above our tent.

The next morning we finished climbing the last pass separating us from Cusco and were rewarded with downhill and flat road the rest of the day. Close to Cusco, a local offered us corn and cheese, which we gladly accepted before finishing our ride. Once in town (WE MADE IT!!), we found a hostel that was recommended on a cyclist blog – Hospedaje Estrellitas – where we thought we’d spend a couple nights before booking into fancy hotel for Christmas. When we arrived, the hostel was so full with friendly tourers (11 cyclists, 9 motorcyclists – current count) that we quickly decided to stay here for the holiday. There wasn’t even a vacancy when we first got here so we pitched a tent in the courtyard, but they made room for us. As Simon would say, it’s not only about the place, but about the people. For Christmas, we are cooking a pot luck dinner with the “family” and we’ll be going to Machu Pichu the next day. Feliz Navidad!! 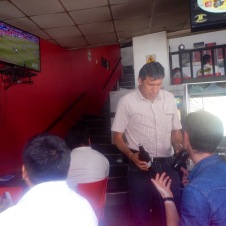 Simon navigating a conversation with his limited Spanish… 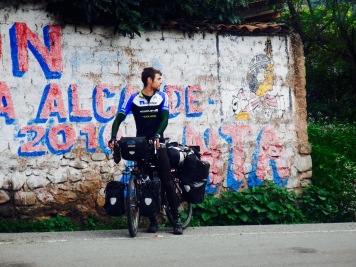 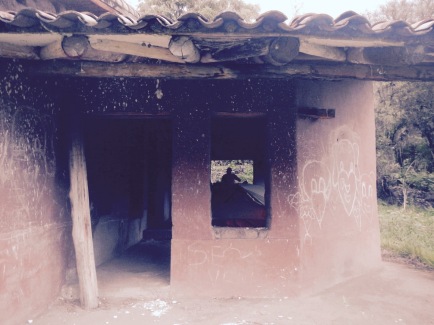 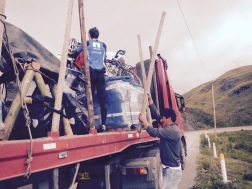