Getting a bicycle on a plane is difficult enough, because you have to adhere to certain rules for each airline to dismantle your bicycle, but getting there is just as challenging.

Having ordered an estate taxi on the advice of the owner of the cab company, Olivia and I looked out the window of my friends apartment at the small estate car below and looked at each other with a considerable amount of apprehension. I knew what she was thinking, because I was thinking the same thing, there is no way two bikes and all our gear will fit.

We were greeted by a small stout man who looked at all our equipment and scratched his head. I suggested we get two taxi’s, but without so much as a word he had managed to fit all of our equipment – plus an ever so squished Olivia – into the back of the car and off we went to the airport.

Checking in our bikes and luggage was a doodle with Air Europa and they didn’t even charge us the 150 euros they were supposed to – result! We had a pleasant short flight over to Madrid and since we had a ten hour layover decided to take the train into the city. We found a great local restaurant and promptly ordered some red wine, langoustines, puff pastry and paella. It was all delicious and extremely cheap (23 euros, which included coffee and desert).

I remember saying to Olivia repeatedly that I could handle the long haul flight as long as they had movies, which of course they didn’t, but we slept most of the flight so it wasn’t much of an issue.

We had booked a bed and breakfast in a decent neighbourhood in Lima to spend a few days getting supplies and our bearings – Casa de Guadalupe. It was run by a friendly women – Guadalupe – who spoke some english and was very welcoming and helpful. After dropping off our things and having a cup of coffee we were pointed in the direction of some good local restaurants.

Our first experience of Peruvian food was extremely good. Chicken soup “sopa de pollo” and two other dishes, one with chicken and beans and the other with beef, were delicious and very cheap – £3 total.

Our next two days were spent gathering supplies of food, picking up a watch for me since my fake G-Shock died on the plane and searching for elusive maps of Peru – which are extremely difficult to find so if you are planning a trip by bike here buy them before you get here or invest in a GPS.

We had a bit of a nightmare putting the bikes back together as well. I had managed to strip the part of Olivia’s bike (see how technical my knowledge is?) where the rear derauiller screws in. Anything like that puts me in a rather large tizzy – not to mention a bad mood – flashback to the Devon camp stove ordeal. Thankfully, I didn’t manage to destroy the part completely, as first feared, and was able to fix it after Olivia insisted I “sleep on it”.

On our third day we set out, without maps, heading south to Chincha Alta. We were pretty confident of getting there since there was only one road – the Panamericana Sur – which follows the coastline all the way. However, we managed to cycle in a 10 mile circle trying to avoid getting on the highway as long as possible. This resulted in a fit of laughter after we ended up taking the road we had been avoiding and finally headed out of town.

The Panamericana Sur is a great road to use heading south, but be warned it is a highway or a motorway as we call it back home. There is a hard shoulder you can use which is wide and pleasant to ride on but has a lot of glass, particularly coming out of lima.

As we got out to the outskirts of the city, we slowed down at the toll checkpoint (free for bicycles) where we were greeted by a very friendly police officer. He spoke to us in Spanish to which we replied “No hablo Espanol”. He said a few more things, laughed, and then shook our hands. We smiled, thanked him for what we thought were good wishes, and continued on our way.

It gets dark around 6.30pm here and as the light was fading we took a side road off to the beach to pitch our tent and get some sleep. We managed 36 miles that day, which we felt was a good start. Our camping spot wasn’t exactly the most picturesque camp site we have every used with all the piles of rubble along the beach but it was quiet, at least until the morning when the large trucks came along. We went to bed after filling our tummies with ripe pineapple and some instant noodles.

Our second day was even more productive. The highway had a few large hills but lots of lovely flats which kept us cruising at a respectable 15mph. With a fully loaded bike that is pretty quick, believe me.

One thing I have to say about cycling is that it makes everything, and I mean everything, taste better. Four or five hours a day of hard work heightens your tastebuds. The can of tuna we packed, for example, became a highlight of my day.

Our third day was the most productive in terms of distance – 55miles. It really feels good watching the miles tick past, although admittedly when you have large hills they do pass a lot slower than you would like. —Olivia’s input: Those hills were tough! The sun was beating down and we had long stretches of incline. It was all I could do to think of one step at a time and remind myself to breathe through my nose. Meanwhile, Simon cycled ahead of me shouting back, “Look at those birds!’—  By the end of the day we decided to stop short of the 62 mile goal we set to reach Chincha Alta and took a side road off to the beach again.

After setting up our tent and getting some delicious dinner we went to grab some water from the local restaurant. The lady spoke good english to our surprise, she lived in London for years and had been a tour guide, and invited us to bring our tent down to their premises for safety – she said the beaches in Peru can be dangerous if you are not careful.

It was a bit of a pain taking all our things down, but in the end we were grateful to her for advice on how to get to Cuzco and where we might pick up some of these elusive maps.

We decided to take a well deserved rest day after three hard days of cycling to pick up some maps, supplies and a much needed shower in Chincha Alta. We unfortunately didn’t find any maps, but we are hopeful that we can download some to my iPad and maybe get lucky in one of the more touristy towns.

So far we are having a great time and are enjoying our trip. We know that the next 600 miles is going to be a hard slog to get to Cusco, some 14,000 feet up some pretty hefty mountains, but we hope that with a bit of planning we can get there in one piece and still with smiles on our faces 🙂 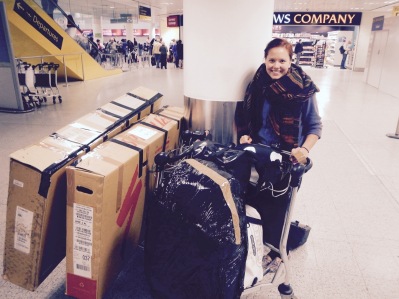 In memory of loved ones lost on the road…

Sheltered from the wind 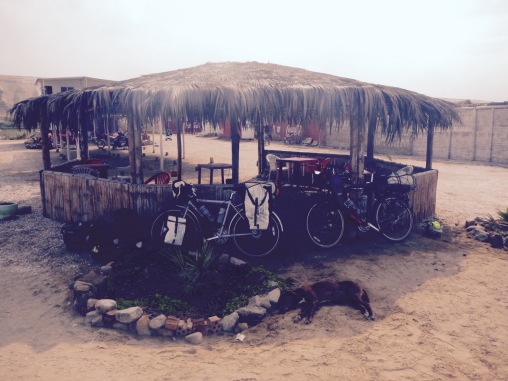 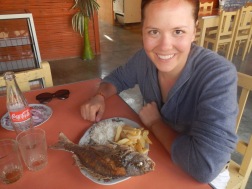 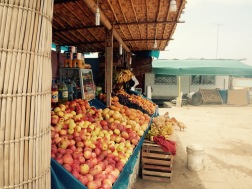